From his lengthy list of publications, Nobi picked out ten books to represent his writing on his English-language author website: 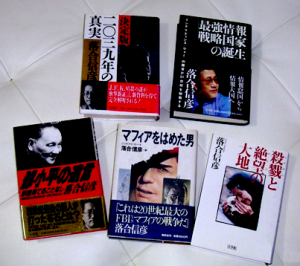 1. Encounter with the Ignorance (2010)
A cynical, humorous satire, poking fun at self-centered and innately illogical politicians and other  ignorant and closed minded people in Japan and elsewhere.

2. Hall of Shame (2009)
Throughout history, Japan’s culture has been based on the sense of shame: A samurai who did something shameful would even commit harakiri. But today, people — particularly some political and business leaders — are shameless and society lacks a sense of honor. This book names and blames.

3. Is Japan Dying? (2003)
In Japan’s future, its politics are a mess, its economy a shambles, its society disintegrating, diplomacy doesn’t exist. Many of my prognostications of only a few years ago are already a sad reality.

4. The Dark Side of China (1997)
Many people praise China’s economic development. But most journalists see only big cities and coastal areas, which get the benefits of the new prosperity. That’s 400 million people. The other 900 million, who live inland, remain very poor.  Some seem almost to live in the stone age, and use the barter system. I was one of the first foreign journalists permitted to cover the poorest regions inland, such as the provinces of Guizhou, Sichuan, Yunnan Gansu, Xinjian, and Uigur.

5. The Last Wonderland (1994)
A detailed expose of North Korea’s desperate situation. I interviewed over 50 North Korean defectors, including Kim jong Il’s nephew who was later assassinated in Seoul by a North Korean spy.

6. The Truth of the Year 2039 (Updated edition, 1993)
In 1964, then-president Johnson of the United States had critical papers concerning the Kennedy assassination sealed for 75 years. In 2039, they will be opened to public. This book, which first came out in the late 1970s, talks about the expected revelations. It was updated on the basis of additional research and  information, and republished in 1993.

2. Hymn for a Thousand Years (2006)
“Omega” is the ultimate weapon, invented by a 22-year old scientist under orders from the Pentagon. It has more destructive power than any other weapon, including the nuclear bomb. Intelligence wars start among the big powers. An agent of the Golani, an Israeli special force, is sent to kidnap the young scientist; if he fails it will destroy Israel’s Intelligence organization, the Mossad.

3. Put the Tiger in the Cage (2005)
The Tiger, meaning China, is about to attack Taiwan in the name of unification. But the truth is, the Communist regime is desperate. The people’s discontent at economic disparities, the lack of political freedoms, and social injustice, are on the point of explosion. There are uprisings everywhere, and even armed police and the People’s Liberation Army can’t stop them. Some of the PLA soldiers defect to people’s side. The Communist government faces a major life-threatening crisis that could lead to extinction. Some generals propose to attack Taiwan to divert popular attention. America and its allies are hesitant to intervene. But the tiger must be stopped from leaping. How? 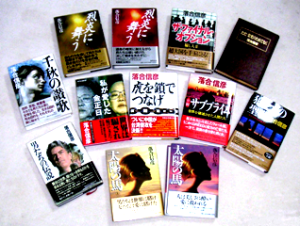 Kim Il Sung and his son Kim Jong Il both have their own security guards in adjoining rooms. It is a historical fact that Kim Il Sung died of a heart attack on that date. I have very credible information that three gunshots were heard that night. Based on my research, I believe that both father and son died at the villa. One of the three doubles Kim Jong Il had took over by order of the military, and became their puppet. The world has been deceived ever since. That much, I believe, is the historical basis of the novel.

Where the fiction starts is when a beloved concubine of Kim Jong il notices the changed behavior and character of the imposter.  He scares her, and she defects to China. The Chinese intelligence agency makes a deal with her. If she provides them with all the information she has, they will place her in a safe house and never reveal her presence to North Korea. But there is one man who finds her…

If: The Titans Who Changed The World  (2011)
Ten men played a crucial role in world affairs. What if things had been different? What if Kennedy hadn’t been assassinated in 1963? What if Julius Caesar had not been murdered? In a series of imaginary dialogues, the author queries history.